On the way from Casper to Thermopolis, Wyoming, we were fortunate to drive through the Wind River Canyon. The river and steep mountains on either side are beautiful, but it’s the scenic exposure of rocks, spanning most of Earth’s history (from 3 billion (Archean) to 220 million (Triassic) years), that makes the 30 mile canyon so unique. Helpful signs along the drive tell you what time period the rocks represent.

While in Thermopolis, we visited the Legend Rock Petroglyphs site then hiked a few miles in the scenic Goosecreek Badlands.

Saturday, we watched young rodeo competitors (ages 7-15) at the Thermopolis fairgrounds, and when it got too hot, we headed to Hot Springs state park.

We spent a full day at the Buffalo Bill Museum of the West, in Cody. It’s 5 amazing museums in one. We could have returned for another full day and still not experienced everything.

Since we were in Dinosaur country, I (Robin) signed up for a day-long dinosaur dig. I discovered a few buried fossil fragments in the Morrison Formation (150my) that were cataloged, then I searched the Sundance Formation (165my) for fossilized sea creatures. It was a fun, educational, and very dirty day.

The Wyoming Dinosaur Center, a museum and research facility, hosts daily digs in the summer and has a world-class display of dinosaurs. My favorite was the Archeaopteryx. There have only been 13 of these fossils discovered, and the one at this museum is a near-perfect specimen. Long thought to be a missing link, it’s a reptile, dinosaur, and a bird, from the Late Jurassic period (150my). The fossil is insured for millions of dollars, and sits behind bullet-proof glass.

On our last full day, we took a trip to Ava’s Silver, a small rock shop in Thermopolis. Ava, a lifelong rock hound and the shop’s owner, told us all about the fossils, rocks, and minerals in the region. We also learned she and her husband Eddie discovered an important ceratopsid dinosaur in Montana. The fossil was formally named and described by a paleontologist in 1986, as Avaceratops lammersi. The dinosaur is named after Ava!

Tomorrow we’re off to Lyman, Wyoming, near the Flaming Gorge National Recreation Area.

Posted by ABrushWithHumor at 5:26 AM No comments:


The south end of the Black Hills did not disappoint. We spent 4 nights camped at a small campground 30 minutes south of Custer State Park. If you’re rolling through Hot Springs, SD, stop at Sunrise Ridge Campground. Josh and Alicia are amazing hosts.

Hot Springs has a number of attractions, including the world famous Mammoth Site (home to hundreds of partially excavated mammoth bones).

We spent our first full day driving the Wildlife and Needles scenic routes inside Custer State Park. Hundreds of prairie dogs and buffalo greeted us as we entered the park from the south. Further along, we saw pronghorn and wild donkeys.

The drive to Sylvan lake on Needles road gave us fantastic views of the igneous rock formations visible throughout the Black Hills. Formed from molten magma, these igneous rocks crystallized at depth, as the magma pushed up through the sedimentary layers. The softer rocks eroded over time, leaving the rock spires the Black Hills are famous for. The Needles are a climber’s paradise, and while hiking around Sylvan lake, we met some friendly rock climbers from Quebec.

The other scenic drive in Custer State Park is Iron Mountain Road. We took this historic route (est. 1933) the next day and saw more great scenery and tunnels that framed Mt Rushmore in the distance.

On our last day we took a tour of Jewel Cave National Monument. With over 200 miles of tunnels, and still only 5% mapped, Jewel Cave may one day be confirmed as the largest cave system in the world.

Posted by ABrushWithHumor at 11:53 AM No comments: 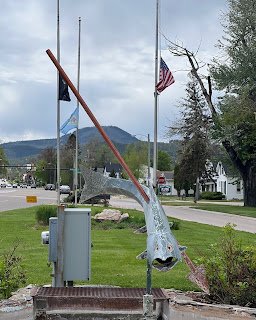 Two and a half days of heavy rain cut into our stay in Spearfish, South Dakota, but we found time to visit a lot of interesting sites in the Northern Black Hills region.

Our favorite expedition was a drive through Spearfish Canyon. We loved the steep, wooded canyon walls dotted with very accessible waterfalls.

🪶Since we’ve visited the Rushmore memorial before, we decided to spend a day at the Crazy Horse memorial and the Indian Museum of North America. We learned a lot about the efforts to complete the monument from one of the board members that manages the foundation. They hope to see the monument finished in 20 years, and when complete, the sculpture will be about three times the size of Mt. Rushmore.

There are lots of interesting towns in the western Bad Lands / Black Hills area, thanks to the Custer expedition and the gold rush of the late 1800s.

🤠 We visited Deadwood. The final resting place of Wild Bill Hickok, and the source of hundreds of outlaw stories, some true.

🚜🌾The High Plains Western Heritage Center does a great job describing early frontier life for everyone who wasn’t an outlaw.

🐟🎣 The DC Booth fish hatchery is part of the National Park system. We learned a lot about the role the hatchery played in replenishing the Black Hills rivers from the knowledgeable volunteers. We highly recommend visiting this site.

Posted by ABrushWithHumor at 9:59 AM No comments: 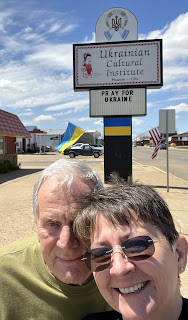 Spending the night at Phat Fish Brewery - part of the Harvest Host network.
While waiting for the brewery to open, we found the Ukrainian Cultural Institute a few blocks away. Amazing art and cultural material, and the curator was delightful to speak with.
After that, we walked around the Dickinson State University campus and found a statue of Teddy Roosevelt at the courthouse. He gave his first speech there at age 27, during a 4th of July parade. It may be the only statue of a president that includes a six-shooter!
Beer and pizza for dinner - perfect ending to a perfect day. 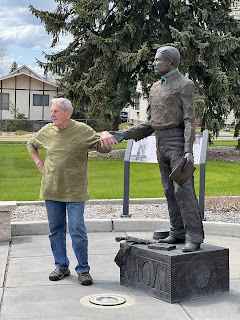 Posted by ABrushWithHumor at 7:20 PM No comments: 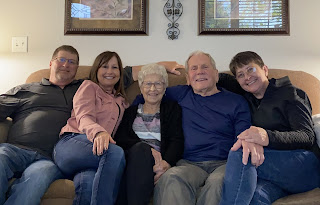 After traveling 1600 miles in 5 days, we spent a relaxing long weekend in Jamestown, North Dakota visiting Charles’ cousin and family. It’s been seven years so we had a lot to catch up on.

During our free time we played tourists. Jamestown is a small farming community 1.5 hours west of Fargo, and is best known for two things - a giant buffalo statue and being the birthplace of author, Louis L’Amour.

We skipped the buffalo museum which reported to have a stuffed ‘white buffalo’ on exhibit, and went on an expedition to learn about the man who wrote over 100 novels and short story collections.

The local library had a kiosk devoted to Louis L’Amour’s books and life but we quickly discovered there was more information on wikipedia.

There were no life size cutouts for cheezy photo-ops. No film clips of John Wayne playing the lead character in one of L’Amour’s most popular works, Hondo. No rare original books behind locked glass. What a missed opportunity.

At the library we also learned Jamestown is the birthplace of singer Peggy Lee. We left the library a bit deflated as the words from a Peggy Lee song played in my head.

Posted by ABrushWithHumor at 10:46 AM No comments: 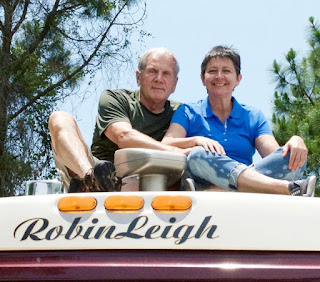 Our first trip took us 450 miles North to a campground just south of Nashville, TN (https://stoneycreektravelpark.com/).

We mare it to the campground about 3:45 and the cats (Marby and Tucker) and the fish (Vivaldi) are doing great. 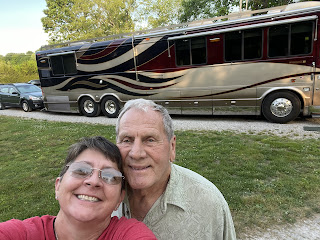 Tomorrow is another long drive to Illinois where we’ll stay for 2 nights.

Posted by ABrushWithHumor at 8:08 AM No comments: