We're in Colorado now but the memories of our visit to New Mexico stay with us.

The cliff dwellings, petroglyphs, and fascinating history of the Pueblo Indians left us feeling like strangers in someone else’s land. For tens of thousands of years, they have called this area home.

We loved Santa Fe for its quirky charm. Such a mixed bag of cultures and interests combine to make it one of our favorite stops.

We had the chance to enjoy the EAT fundraiser for the arts which led us through dozens of galleries over two evenings. Each gallery was open and inviting, featuring food from local restaurants making it a true feast for the senses.

Los Alamos was a must stop since we’re both major geeks. We loved learning about the history of the Manhattan project.
Wherever you stand on nuclear weapons, it's an important part of American history.

The Manhattan Project came to Los Alamos in late 1943 with a group of about 200 people. Oppenheimer knew of the area because of the Los Alamos Ranch School. a "boys only" prep school to toughen up boys from back East. The existing buildings would give them a head start and the location on a thin mesa above two canyons made it easy to secure. General Groves agreed and the school was quickly shut down.

Many scientists brought their families and over the span of one year over 50 babies were born in the small community. Evidently, the scientists did not just work 24/7 on the bomb. With super security clearance, no one outside the community knew what was going on up on the hill. Everyone even had the same mailing address: P.O. Box 1663. When Sears (think pre-Amazon) started getting dozens of catalog requests they thought it was a hoax and would only send one. That catalog got shared a lot.

In a little over a year, scientists had designed and were ready to test the first bomb. Oppenheimer chose the area around White Sands, NM and in July 1945 they had the first successful test of a nuclear weapon. A month later, US forces would drop bombs on Hiroshima and Nagasaki three days apart, ending the war in the Pacific.

This of course started the arms race with the Soviet Union with help from leaked information provided by a member of the British contingent of Manhattan Project. Since he was a member of our allied forces the US did not do a thorough security screening on him, assuming that the British had cleared him.

Today Los Alamos has a population of 12000 people and over 8000 work in the scientific fields there. It also has the highest density of PHDs and millionaires in the country.

While north of Santa Fe we also took a drive out to see the Valles Caldera National Preserve. The 89000-acre park encompasses one of the 3  dormant supervolcanoes in the US (the others being Yellowstone in Wyoming and Long Valley in California’s. Erupting 1.2 million years ago, it scattered thousands of feet of volcanic tuff all over the New Mexico and Colorado and sent ash as far as Iowa. The eruption was hundreds of times more powerful than Mt St Helens.
The preserve, operating since 2013, has hot springs, streams, fumaroles, and natural gas seeps. Volcanic domes dot the caldera floor, with a variety of igneous stone, from pumice to obsidian, bearing witness to a variety of volcanic activity in the past. The highest point in the caldera is Redondo Peak at 11,253-feet (3,430 m). It is a resurgent lava dome located entirely within the caldera. The preserve encompasses vast grasslands, supporting an abundance of wildlife, including 17 rare species and one of New Mexico’s largest elk herds at about 2500. 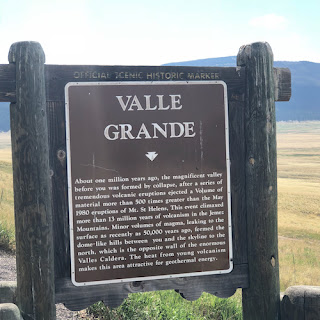 While at the visitor center located inside the Caldera, we watched crew filming for an upcoming Nat Geo series "Prairie Dog Home Companion". They were documenting the research of biologist John Hoogland, an expert in the field of Prairie dogs.

Taos was a perfect last stop for us - even more laid back than Santa Fe. We caught a live performance in the Taos Plaza the first night and took many nice strolls around town. We had our first "high altitude" hike to Williams Lake (10,000+ feet) and enjoyed a cold beer afterward at Taos Ski Valley.

After two weeks around Santa Fe and Taos, we said goodbye and drove out along highway 64. Luckily for us, this road was just opened after a large fire. We saw ash everywhere and could still smell smoke in the air.

We loved NE New Mexico but it's getting really hot and there is so much more too see. Check out more photos here in our FLICKR album.  Follow us on Fcebook and Instagram to see where we're at now!

Next stop Canon (pronounced canyon) City, Colorado.
Posted by ABrushWithHumor at 9:58 AM No comments: 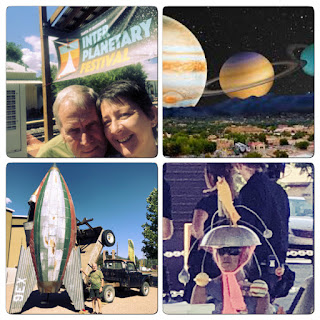 We rolled into Santa Fe around 2pm and got settled at a KOA park. Searching for something to do, we discovered the Santa Fe Institute was hosting the annual Interplanetary Festival - focused on the challenges we face to become an interplanetary species. And yes, it was as strange as it sounds. A fantastic mix up of science, science fiction, and art.

The highlight of our visit was a chance to talk to Ed Fenimore , a high energy astrophysicist from Los Alamos. He spent his career looking at the birth of black holes and the nonproliferation of nuclear weapons (he built the detectors that tell us when a nuclear detonation happens on the planet). Wonderful to hear his personal take on the gravitational waves discovery by LIGO and the latest NASA news about organic compounds found on Mars. Ed was cheerful and animated - Charles called him “Sheldon Cooper senior” and the description fits!

It’s often said that humans have a hard time imagining how technology will impact them in the future. 50 years ago few would have forecast the smartphone and internet; giving everyone free and instant access to unlimited knowledge. This event was a great way to hear about what really smart people think our future could hold. From artificial Intelligence to digital currency to bio-engineering - it looks like we’re in for an exciting and bumpy ride!

Posted by ABrushWithHumor at 7:08 AM No comments:

Day one, mile one 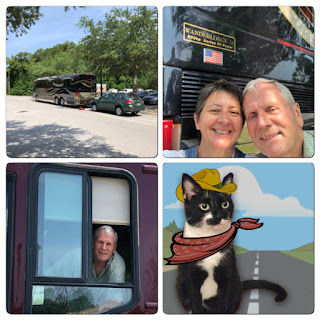 We always have a million “last minute” reasons why we can’t leave but we always seem to sort things out and get on our way. This Spring was no different, with both planned and unexpected obstacles but we can report that as of 10:30 CST, June 3rd we are on our way!

Our travel plans this summer will focus on the Rockies. Charles, Tucker, and I will start with a week in Santa Fe and then slowly move north in search of an elevation that keeps us at a comfy 75 degrees. Of course we’ll dip down occassionally to catch some ‘not to be missed’ state and national parks. Colorado, Utah, Idaho, and maybe Montana are on our list but if we find a spot we love we might just stay there all summer.

This week we’ll do a few one night stops from here to Santa Fe with the first stop being Biloxi. Not only is it an easy 4 hour ride from Destin, there’s a craps table at Hard Rock casino that owes me some money!

Share with us your favorite spots along the way - we love finding fun new places to visit!

This link will take you to a google map list of everywhere we have camped on this trip: https://www.google.com/maps/placelists/list/1gobTepFxtEQ7l0FG3g_IAPVR-PQ?hl=en

~ Robin
Posted by ABrushWithHumor at 11:02 AM No comments:

Had fun in Twillingate Thursday afternoon watching the kick off of their summer festival. Link to photos -
https://spark.adobe.com/page/pVJFxgMHAto6t/
Posted by ABrushWithHumor at 6:40 AM No comments:

In search of an Iceberg

Today we headed to Bridgeport Newfoundland to see a rare sight - the first iceberg to migrate into their harbor in 35 years. It was not there.

We met a nice guy carrying a lobster down the street and he said "It's still out there, sure enough. Around the corner. I'll call my son and he'll take you to see it." We said OK (of course) and headed for the harbor. We met Dwayne Canning there and he took us straight away on his 14 ft dory.

When we got just outside the main harbor, the iceberg was sitting there doing what icebergs do - melting slowly and making a lot of cracking noises. The weather has been hot the last few days so this berg is getting small fast. We're so happy we met Dwayne (and his Dad) and got the chance to see this berg up close! 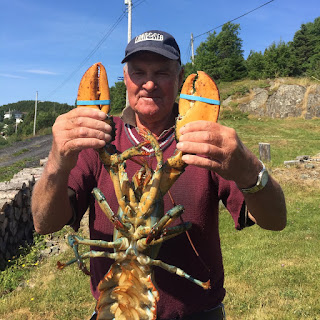 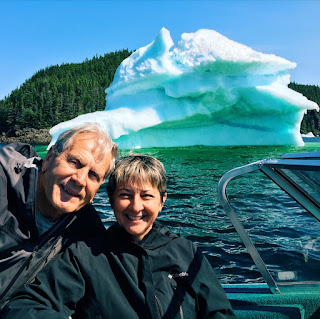 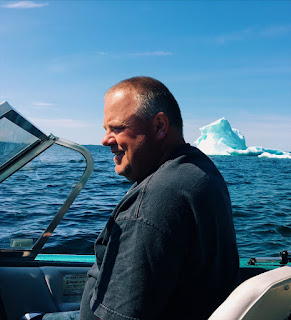 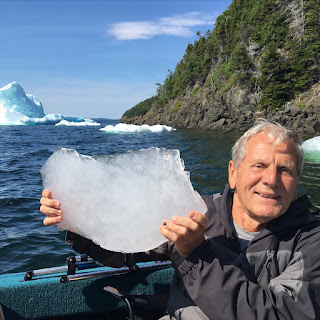 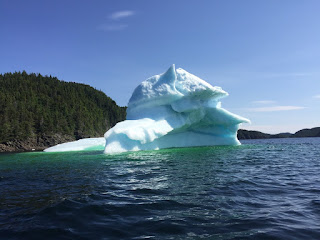 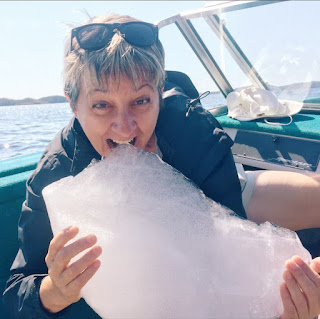 Posted by ABrushWithHumor at 4:48 AM No comments:

Great visit to the small but impressive aviation museum in Gander, NL. Clockwise ftom top left: the first flight simulator, inside the cockpit of a DC-3, part of the twin towers presented to Gander on the 10th anniversary of 911 for helping thousands of stranded travelers. #newfoundland #gander #ontheroad

Posted by ABrushWithHumor at 12:50 PM No comments: