We continued our travels through Oregon by returning to the coast near Florence. South of Florence, Oregon the coast becomes less developed with beautiful cliff views and long undeveloped beaches. We stayed at Jessie M. Honeyman state park for a few days (strange name but a beautiful park) while we explored the dunes, beaches, and attractions along the coastline. 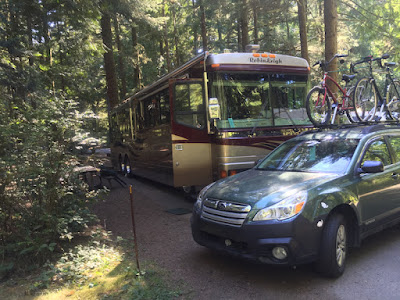 We spent a few hours one morning at the Oregon Coast Aquarium waiting for the fog to lift along the coast. Our favorite exhibit was the seabird aviary where we saw puffins up close and personal. It’s not a large aquarium but it is well laid out and gives you a good idea about sea life along the Oregon coast. 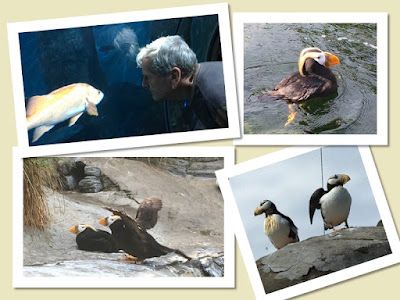 The rest of our time was spent enjoying wide open beaches and visiting the lighthouses that are scattered along the Oregon coastline. From the tallest (Yaquina Head Lighthouse) to the oldest (Cape Blanco Lighthouse), each lighthouse is beautiful and unique. 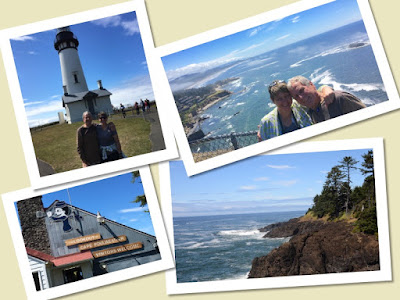 From Honeyman park we traveled further south to Nesika Beach to explore the rest of the Oregon coast. We enjoyed the laid back atmosphere from Gold Beach to Brookings and took some 'down time' getting haircuts, shopping, and attending a pirate festival at Brookings harbor.  After covering 99% of the Oregon coast we were ready to see the redwoods of northern California.

We had booked a week in Klamath, CA to give us time to see the nearby redwood forests and still only barely touched the surface of what there is to do in the area. The owner of RV park gave us maps of things not to miss and Park Service rangers kept us from getting lost. We hiked trails in both the State and National Redwoods parks and saw trees taller (320+ ft) and older (2000+ years) than anything we’ve ever seen before. This is one area we will visit again. 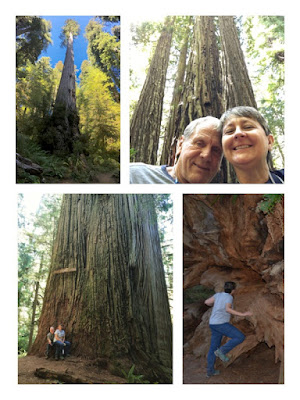 Here are links to a few of our favorite hikes: Fern Canyon, Lady Bird Johnson Memorial Grove, The Boy Scout Tree Trail, and the Tall Trees Trail and Grove.

We also managed to squeeze in a side trip back into Oregon to check out the Oregon Caves National Monument. This national park features a wonderful 1.5 hour “walk and crawl” through marble caves in the northern Siskiyou Mountains. A terrific experience unless you’re claustrophobic. 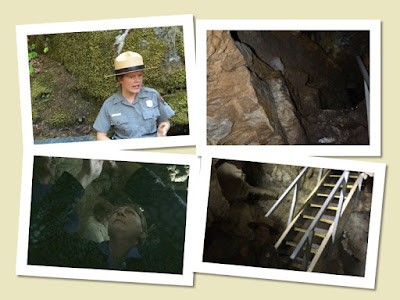 Tomorrow we head 100 miles south to Humboldt Redwoods State Park to visit another ancient forest for a few days.

Posted by ABrushWithHumor at 3:48 PM No comments: 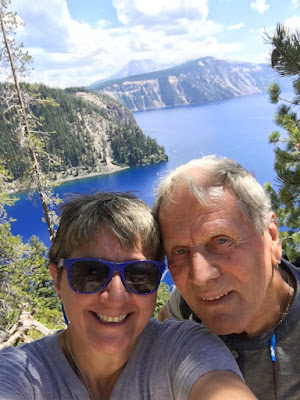 We took a scenic drive on Friday, April 5th and arrived at the North entrance to Crater Lake National Park around 11am. Of course we headed straight for the first overlook.

Crater Lake is BLUE, incredibly big and BLUE. The road that takes you around the rim of the lake offers beautiful views with interesting facts about the lake and the park. Here are a few cool things we'd like to share:

How Crater Lake came to be -
The basin that eventually became Crater Lake formed when a volcano called Mt Mazama erupted and collapsed 7,700 years ago. The volcanic basin, called a caldera, eventually filled with water and became crater lake. Mt Mazama was estimated to be around 12,000 feet tall, the rim of the caldera now ranges from 7000 - 8000 feet. 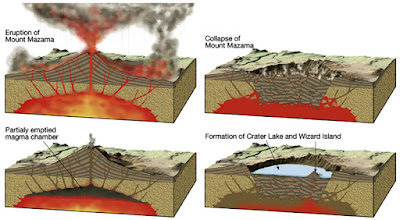 It’s Deep -
Bottoming out at over 1,900 feet, Crater Lake is the deepest lake in the Americas. It is the ninth deepest lake in the world. There are no feed rivers or springs, the water level is maintained by precipitation, evaporation, and seepage. This helps to explain the water’s clarity and extremely blue appearance. 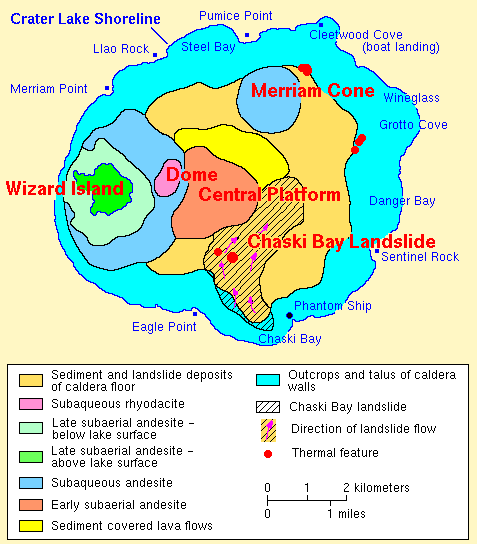 Why the surface is so blue -
Pure H2O - Just plain water with no sediments, algae, pesticides or pollution, will absorb all the colors of the spectrum except the blues. These shortest wavelengths will bounce around and back, making the water appear blue. There are 4.6 trillion gallons of water in the lake, so there are a lot of water molecules to bounce off of.


What lives in the lake -
Very little. Fish are not native to the lake. They were introduced in the lake from 1888-1941. Six species were originally stocked, but only two have survived: Rainbow Trout and Kokanee Salmon. Because they are not native to the lake, fishing is not only allowed, it's encouraged. No license is required and there is no limit on how many fish you may catch - the only rule is that you must use artificial bait and you can’t throw fish back (for you catch and release fans). Yes, Robin fished. No, she did not catch anything... it was almost worth the climb (see below). 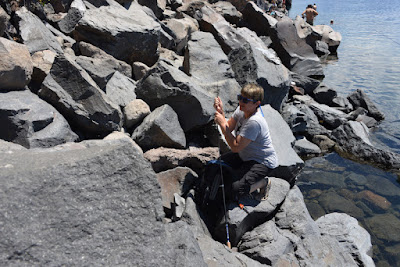 Snow in July -
The park is snow-covered from October through June, but with an average annual snowfall of 44 feet, snow can stick around through July. The last time the lake's surface was completely frozen was 1949, though it came close to a total freeze in 1985.

Getting to the lake -
The only place you can actually get to the water is by hiking Cleetwood Cove trail. The trail is 700 feet down and the hike is about 1 mile, one way (lots of fun switch backs at up to an 11% drop). The reward is you get to touch the water, swim, and even fish. You can also go on a boat ride to Wizard Island and back. We were surprised to see so many walking the trail. It is an easy walk down but the climb back up is a challenge for most people. A fair bit of shade and benches along the way ease the pain. It’s like climbing 60 flights of stairs. 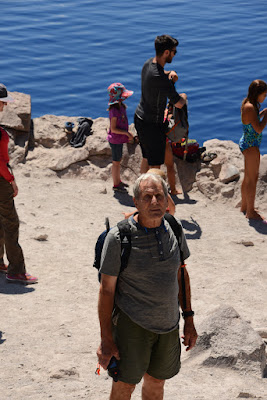 Other Cool stuff -
Crater lake has a castle (volcanic pumice), a phantom ghost ship (pinnacle rocks in water), a wizard island (named after its "wizard hat" shape, not magical qualities), and an "old man" tree that has been floating around the lake for over 100 years. Lots more cool features described here. 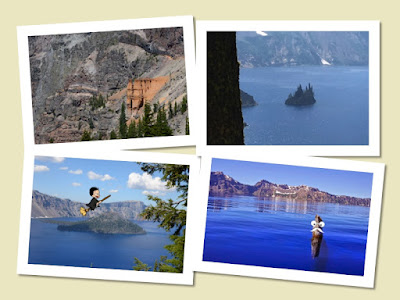 Our first impression of Crater Lake was “Wow! what a beautiful place,” but after peering over the rim for the 20th time our response was “Look, a blue lake and there’s that wizard thingy again.” Still, it is a sight not to be missed and a park we will never forget.

Crater Lake national park gets half a million visitors each year.

Finally, here's something fun from a terrible movie "The Crater Lake Monster", released in 1977"

More of our photos here: Crater Lake
Posted by ABrushWithHumor at 5:00 AM No comments:

On August 1st we headed east to Detroit Lake campground. We had a nice spot in the trees a few hundred feet from the lake with plenty of space.

The next day we left early to visit Silver Falls; called the ‘crown jewel’ of the Oregon state parks. It truly is a beautiful place. The land was owned by one family for almost a century and donated to the Oregon in the 80s. Most of the trails and bridges were created in the early part of last century by the CCC. You can read more about the park here.

Our goal was to hike the “Trail of 10 waterfalls”, a big part of what makes Silver Falls so beautiful.
We have hiked lots of waterfall trails, that’s kind of our “thing”. We were even married at a waterfall almost 25 years ago. This waterfall trail beats them all - gorgeous scenery, perfectly maintained trails, and you can walk behind THREE of the waterfalls. You know that scene in “Last of the Mohicans” where Hawkeye says “Stay alive. I will find you”? 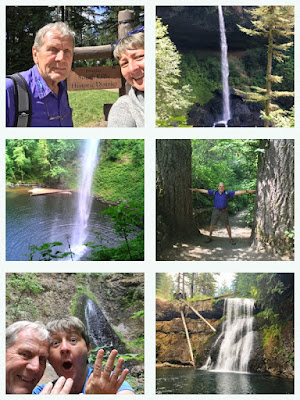 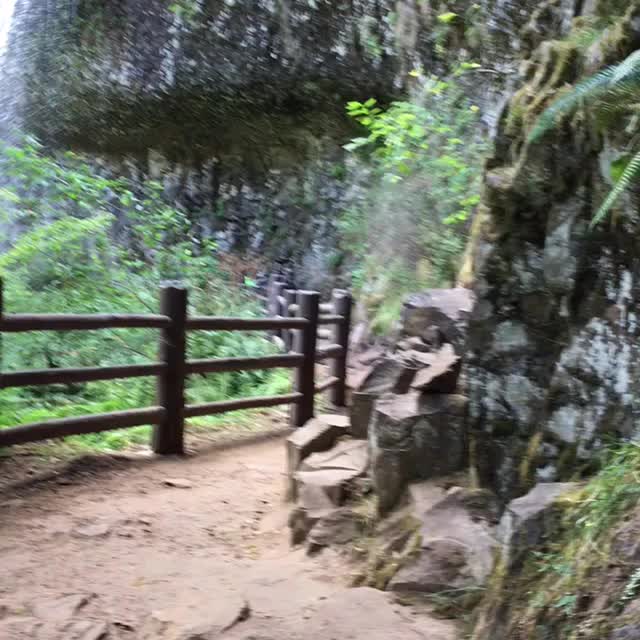 Seeing 10 waterfalls is very motivating if you're a hiker. By the time we got back to where we started we were shocked to see we had hiked almost 9 miles in total. We had a double cappuccino to celebrate and drove back to Detroit Lake campground, tired and happy. 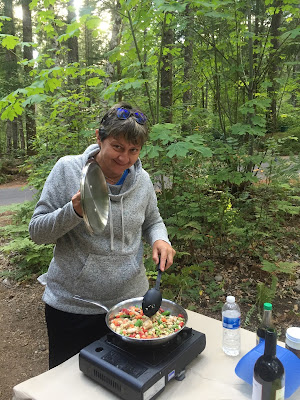 Posted by ABrushWithHumor at 5:00 AM No comments:

The day after our city of Portland visit we headed east along the Columbia River to explore the Columbia River Gorge. The shape of the Columbia river basin began with the largest outpouring of lava in the history of North America from 16 to 6 million years ago. Advancing and retreating glaciers carved the basalt creating today’s waterfall filled landscape that makes the Gorge a popular destination. 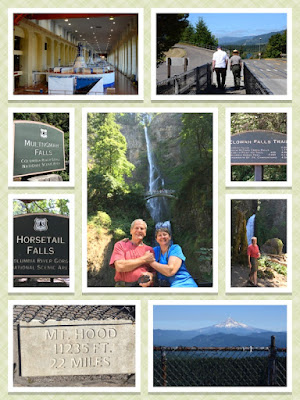 We stopped at the Bonneville Dam, constructed in 1934, to learn something about this historical landmark. We were treated to a surprise tour by an engineer named Lee who once worked there and designed many of the enhancements to the current dam and power plant. Lee told lots of great stories and gave us bits of trivia that added to our appreciation of this amazing place.

Driving along the Historic Columbia River Highway we stopped to climb to the top of Mt Larch and were able to see 5 of the Cascade peaks at one: Mt St Helens, Mt Adams, Mt Rainier, Mt Hood, and Mt Jefferson. A truly amazing sight.

Closer to the river we visited many of the scenic waterfalls near Vista Point. We climbed to Wahclella, Elowah, and Multomah falls, logging almost 9 miles in the process (half of them straight uphill!). 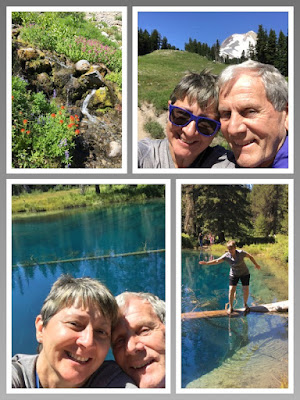 The next day we drove to Mt Hood Meadows, on the southeast side of Mt Hood. We learned they were offering ski lift rides up to the tree line of Mt Hood. We’ve never been skiing at Mt Hood but it sure is a beautiful place in the Summer. We enjoyed the sunny day with temperatures in the 60s. After taking the lift chair up, we hiked a few miles on the Timberline trail until we reached a waterfall. Not wanting to get wet feet and hungry for lunch, we doubled back to the lift.

After a well deserved lunch at the base of Mt Hood we continued our adventure to Little Crater Lake - a perfectly clear, deep, cold, tiny, spring-fed lake. Goofing around on a log jutting into the lake, one of us fell in the ice cold water and had to hike for an hour to dry off before continuing with our drive.

We finished the day driving around the east side of Mt Hood before returning to our RV near Portland.

More photos here on FLICKR
Posted by ABrushWithHumor at 5:00 AM No comments: 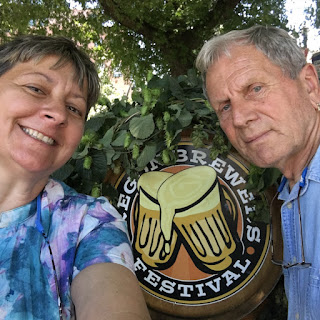 It’s been another busy week on the road as we continued our travels around Oregon.

We arrived at our next stop, an RV park NE of Portland and planned our next expedition. On July 29th we headed into the city of Portland using the fast and friendly MAX train. Our goal was to find Pioneer Courthouse Square and meet up with the “Secrets of Portlandia” free walking tour.

The “Secrets of Portlandia” free walking tour is actually one guy, Eric, who does an amazing walking tour around downtown portland twice a day in the summer time. He started the tour 5 years ago after doing similar tours in Spain and Portugal. He saw the need for a “pay what you wish” tour in Portland and has turned it into a successful business. It is at the top of Trip Advisor’s things to do in Portland.

We learned a lot about the history of Portland, and laughed at the quirky things that make Portland unique: 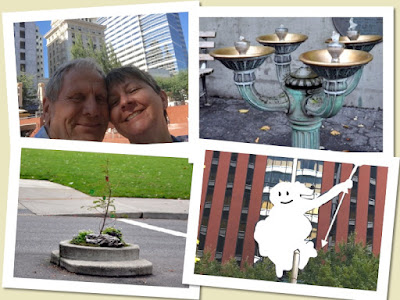 We really enjoyed our tour and when it ended we headed to the river to check out the Oregon Brewers Fest to sample some home brewed beer. Full of beer and bratwurst, we wandered over to Voodoo Donuts. We spent the end of our Portland visit at Powell’s City of Books before hopping on the MAX back to our RV.

Portland is a great town we look forward to visiting again!

Follow this link to see other photos from our visit to Portland and surrounding areas: FLICKR Portland
Posted by ABrushWithHumor at 10:37 AM No comments: