On to the Kenai Peninsula

We arrived in Valdez on June 28 after passing through the Chugach mountains. It is a small town with about 4000 people and has a cozy feeling. Set on the coastline with the Gulf of Alaska in front of it and the Chugagh mountains on the other sides, it feels like paradise (in the Summer time anyway).
Most of the things you can do in Valdez involve being outside - glacier cruises and wildlife viewing, offshore fishing for salmon and halibut, kayaking along the shore line, fishing in the local streams, and hiking in the surrounding mountains. We spent a relaxing 5 days soaking up the fresh air and enjoying the local scenery. We also learned about the 9.2 earthquake that destroyed the original town site and the Exxon Valdez oil spill of 1989. 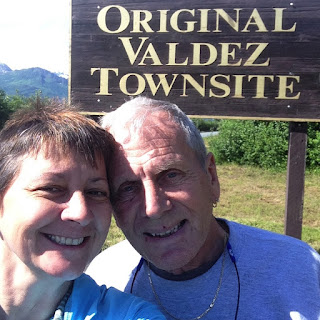 We left Valdez on Saturday, July 4th hoping to miss some of the traffic around Anchorage and the Kenai Peninsula. We had a nice drive along the Glenn highway and stopped for the night at the Matanuska glacier viewpoint. A great view and we had the place to ourselves. 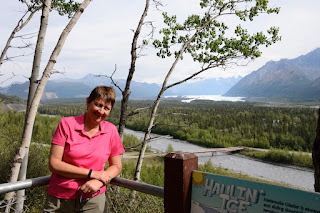 On Sunday we met up with other Bluebird coach owners at the Racetrack south of Palmer, Alaska. It was a great chance to see other coaches like ours and talk about our travels. We said goodbye to Chris and Mac as they had to travel back to the States soon. We headed south toward Anchorage Monday morning and after stopping at Sams Club for diesel and supplies we continued on to Seward.

We decided to spend 4 nights in Seward and spent one day on board a glacier cruise boat exploring Resurrection Bay and the Kenai Fjords national park. We were on a small boat with around 20 guests and had a great time watching humpback whales, orcas, sea lions, harbor seals, sea otters, and puffins. 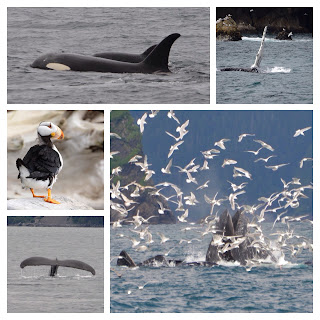 While in Seward we also spent time hiking to the Exit Glacier in the Kenai Fjords National Park and we visited the Alaska Sealife Center.

We left Seward Friday, July 10th headed north. The Trail River Campground was around 25 miles north of Seward and we decided to check it out. We got lucky and found a great spot next to the lake so decided to stay for a quiet weekend. We did very little except sit by the fire, fish, and visit the nearby tiny town of Moose Pass. It was a pretty rainy but relaxing weekend. 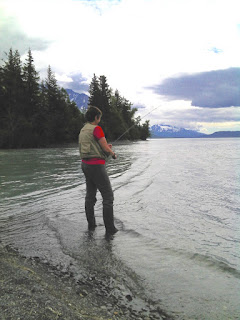 Monday, July 13th we headed for Cooper Landing, Salmon fishing capital of Alaska. We parked at the Kenai Riverside RV park and I booked a guided float fishing trip on the Kenai River for Tuesday. Charles does not like to fish as much as I do so he planned to stay behind with Tucker for the day.

I met the guide and my two fishing partners, Steve and Ruth from Wisconsin, at 6am Tuesday morning. We suited up in our waders and hit the river. After a little drift fishing for rainbow trout we found a nice spot to try for some sockeye salmon. We spent most of the day standing in shallow water casting for Sockeye. 12 - 15 pounds of  angry fish on a fly rod is the most exciting fishing I have ever tried. We landed our limit for the boat (12 sockeye salmon) over a 5 hour period and had a great time laughing and encouraging each other. 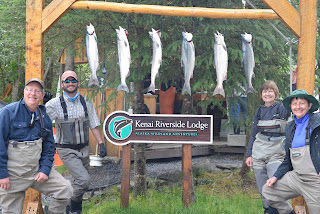 That night Charles and I cooked some of my catch on the grill and it was delicious! 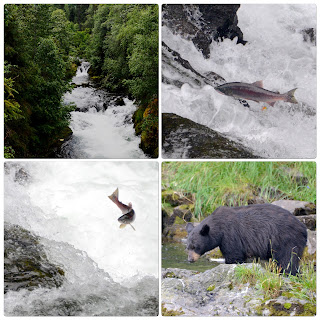 We liked the Russian River Campground so well we've decided to move our coach there tomorrow. There's also great fishing for sockeye and trout on the nearby Russian River!