From Squeal to Squall

After spending a few windy days near Staniel Cay, we moved down to Cambridge Cay (part of the Exuma land and Sea park) and spent 3 days swimming and snorkeling at a dozen great reef spots. 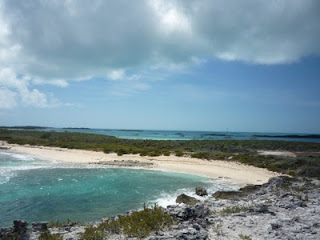 On the morning of March 9th we ran the generator for a few hours to charge the batteries and bake some muffins.

As the muffins were cooling we heard a squeal from inside the engine room. Charles stopped the generator right away. Smoke poured from the engine room when we opened the door and Charles soon found the source of the sound - the fan belt attached to the generator's water pump and alternator had burned through.

Replacing a belt would have been easy but the reason it broke was because the 12V alternator had seized up. We needed a new alternator or we could not run the generator.

We looked at each other and began imagining life without a generator. We could have stayed in the Bahamas (at one of a few very expensive marinas) and wait for an new alternator to arrive (add ridiculous shipping cost and import fees) or we could head back to Miami where we knew we could get anything shipped overnight.

We plotted out course - 230 miles in 36 hours. The weather window was there and we could do just it; non-stop. At 9:30 Wednesday morning we headed out.

Without the generator we were forced to run our engine occasionally to charge our batteries but for the most part the sails provided our power. We crossed the Exuma Bank during the day and then made the long northerly run up the Tongue of the Ocean through the night. At 2am we approached the NW Channel light on the Bahama Bank and navigated the reef onto the bank and beyond.
Some time after lunch we weaved our way through the last reef south of Cat Cay in the Bimini islands then we were on our way across the gulf stream.

We had kept good speed for most of the trip so we were expecting to arrive at the Miami harbor channel around 5:30pm. That was before the squall line met us 29 miles off the coast of Florida. 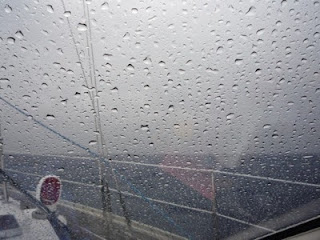 A dark gray line formed on the horizon and traveled fast. In a few minutes we had all sails put away and we were in 35-45 knot winds, rain, hail, and zero visibility.

The radar showed a few large freighters nearby but they were holding course and no danger to us. We maintained our heading under power and slowly worked our way through the squall line.

We made the Miami channel at sunset with the Miami Beach skyline glowing red. 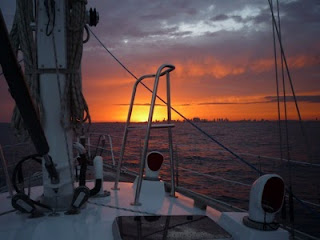 Fast forward a few days - new alternator installed (Thanks to a quick response from Carol at www.genset.com), water tanks full and groceries stored, we headed out of Miami Beach Marina and over to Stadium anchorage for a few days. We found the anchorage to be a fun place to watch the sea planes come and go! 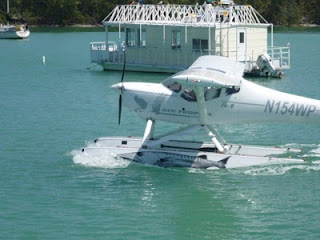 Our friends Brook and Terrence met us there and we spent a relaxing Saturday afternoon hanging out on the boat and catching up. 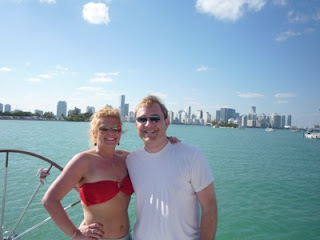 Monday morning we left Miami and headed south past Stiltsville and into Biscayne Bay. 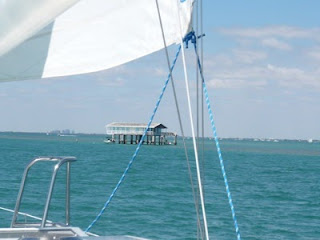 Because of our mast height (76 ft) and bridges (65 ft) we can't travel inside past Key Largo but we will spend a few days inside the bay enjoying the light winds and flat water sailing before heading out to Hawks Channel and ports further south.
Posted by ABrushWithHumor at 7:18 AM No comments:

Swimming with the Pigs at Staniel Cay

While waiting for the winds to settle, we anchored off Big Majors Spot just North of Staniel Cay in the Exumas.  It is a big anchorage with LOTS of boats in it. It's popular because you can get to a few restaurants and a grocery store by dingy and the WiFi is not terrible (not free either but at least it's present!)

Thursday we waited for low tide and took a trip to Thunderball Grotto. The cave was made famous by a scene in the James Bond film, Thunderball. At low tide you can swim under a ledge and it opens into a pretty large cave. While putting on our snorkeling gear, Charles broke the strap on one of his fins. He had to test out whether he could swim with just one fin before we attempted to go through the cave entrance. The tide was not running too hard but the wind driven waves were fierce!

As we approached the cave entrance the fish came to greet us. A large school of Sergeant Majors was very friendly. We swam around inside the cave for a while and then headed back to the dingy. Charles threw me a ziplock full of frozen peas and I fed the fish for a few minutes. Did you know Sargent Majors have tiny teeth? I do now - they were all over me!

Here's what the grotto looks like on the inside - not my photo, we don't have a waterproof camera at the moment (bummer)... On the way back to the boat we saw the wild pigs on the beach at Big Majors Spot. They are famous for mooching from the sailors and as we approached by dingy two of them came into the water to greet us. We didn't have any food to offer so we were trying to stay clear of the pigs but they wanted very much to greet us.

Once we were on the beach the pigs ignored us and went about trying to get into a dingy already pulled up on the beach beside us. I tried to scratch the ear of a smaller sow and she almost bit my leg - after that I stayed back a bit. Just as we thought the pigs had given up on the dingy, a big one got his hooves over the side and grabbed a small bag of what looked like garbage. I tried to shoo them off but Charles told me that was a good way to get bitten so I took his advice and left them to their spoils.
Posted by ABrushWithHumor at 11:00 PM 1 comment:

Our Sailblog site is having trouble at the moment so we're going to post updates on Blogger for a while. When the site is back up you can see our logs from previous adventures here: RobinLeigh on Sailblogs 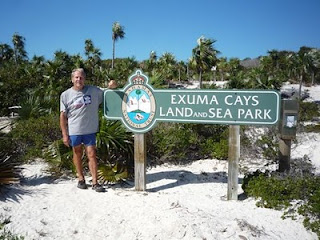 We wish we could describe Warderick Wells and the Exumas Land and Sea Park with words but we aren't that skilled and you truly have to be there to experience it. We spent 4 nights there and never got bored. With miles of trails and a dozen spots to swim and snorkel, there was always something to do.

There are no restaurants or retail shops in the park, just a Ranger's office and miles of well marked trails and signs about the flora and fauna of the islands. At the highest point on Warderick Wells, Boo Boo hill, boats can leave behind a piece of driftwood with their name on it. Some boat signs have been there for a dozen years or more. 3 mooring fields at Warderick Wells offer protection from any wind. The moorings are well maintained and inexpensive ($20/night for a boat of our size) and the park staff is friendly and helpful. We can't say enough good things about the place. This park, like the other 25 in the Bahamas National Trust, is 'no take' zone. No fishing, shelling, etc.

Under our mooring we had a school of big-eye Jacks, yellow tail Snapper, and an occasional Shark. They go nuts when you throw bread on the water and they especially liked Tucker's dry cat food! We got permission from the park ranger, Andrew, to leave behind two Geocache for future trekkers. One on land and one underwater! Charles will have them documented in a day or so and we'll post the links to the blog.

You HAVE to check out the pictures: Warderick Wells photos set.

We're sitting near Staniel Cay now, waiting for the strong NE winds to blow themselves out.
Lots to do here - Thunderball Grotto, swimming pigs.... more later!
Posted by ABrushWithHumor at 10:58 AM No comments: