The Legend of Running Eagle 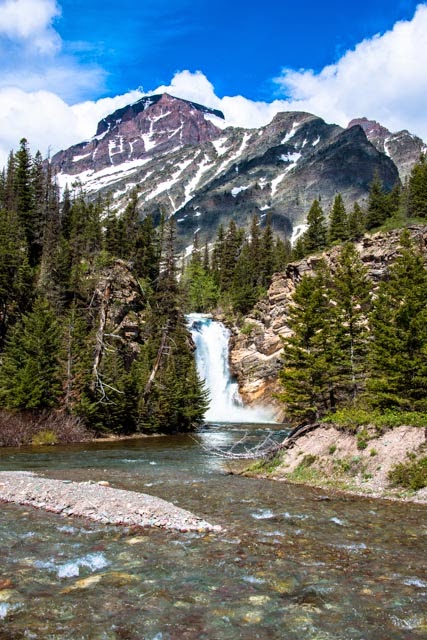 This waterfall, at what is now the Two Medicine area of East Glacier National Park, was named for a great Blackfoot warrior woman named Running Eagle. She was born in the early 1700's in the heartland of the Amskapi-Pikuni. Running Eagle was a real person, not a legend or a myth.

Running Eagle's life is an illustrious saga of leadership and daring deeds. She is the only young woman of the Pikuni people to have gone on a vision quest. It was to these falls that she came on her quest and it was at this most sacred place that she had her vision to become a leader and warrior.

Running Eagle became a true woman warrior. She was a great horsewoman, fast runner, and an excellent hunter. She was also kind, thoughtful, and generous; traits much admired by her people. Her exploits as a warrior were recounted in lodges throughout the land.

Near her thirtieth year Running Eagle was struck down and killed by a Flathead indian while on a raid across the Continental Divide. In a most fitting honor her warriors brought her home and laid her to rest in a tree overlooking these falls. 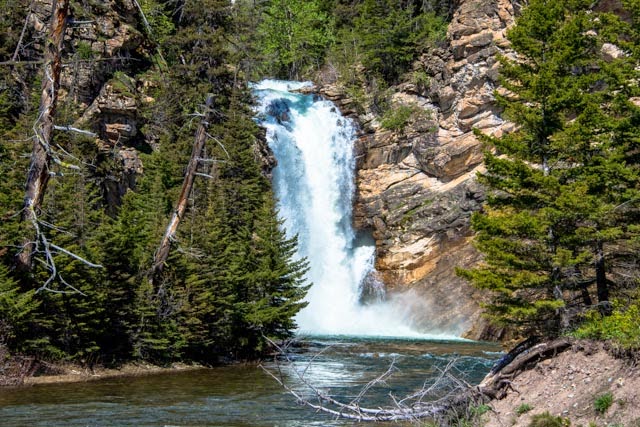 Running Eagle Falls is also a "Trick Fall". There are actually two falls in one. A lower fall can be seen at the lower right, where water flows through a cavern and out the side of the mountain. The falls are fed by Two Medicine glacier lake.

Getting lost in the berry patch 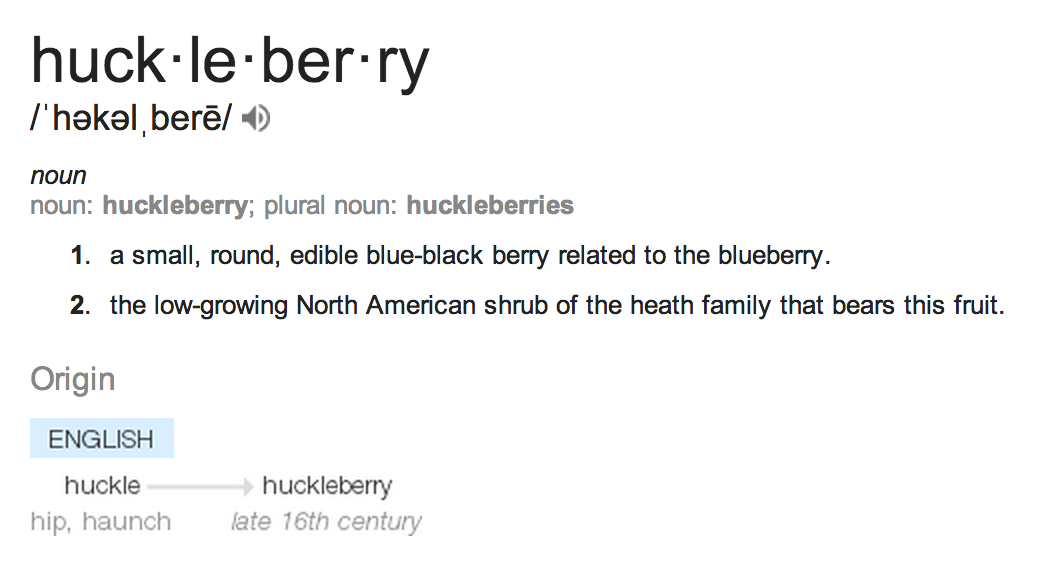 Huckleberries grow in the Pacific Northwest region and the mountains of Montana and Idaho in North America. They can usually be found on the lower slopes of mountains. Walking along the "Road to the Sun" at St Mary's (the Eastern side of Glacier National park), we saw thousands of blooming bushes. 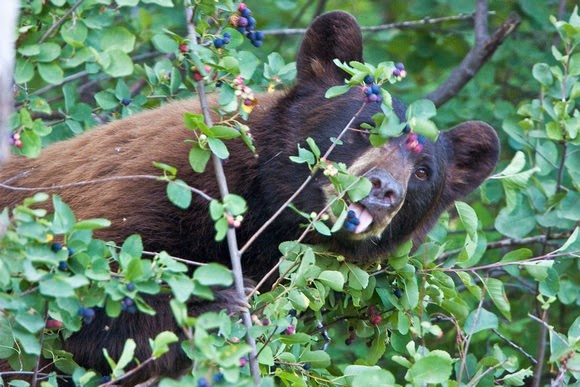 The huckleberry has fleshy fruit with 10 small stones, differing in this respect from the blueberry, so that the fruits, although tasty, are rather crunchy. They're a favorite and a staple of the Black and Grizzly bears in the summer months. A bear will munch on them for up to 14 hours a day in the summer, consuming as many as 30,000 berries a day.

So why the name "Huckleberry"? This is where my story derails for a bit:

Huckle means a hip or a haunch. Also refers to a projecting bunch of something or a part like a hip. Best I can guess is that the bushes grow about hip high so it seems like a good fit.

It turns out, huckleberry also refers to a large group of similar berries which grow in other places in the US. In the South, the huckleberry is actually red and sometimes called the "Southern Cranberry". Huckleberries in the south made me think of Mark Twain and "Huckleberry Finn". Why did he name his character that? 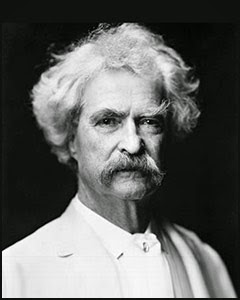 Mark Twain / Samuel Clemons: What's in a name? - in his book "Life on the Mississippi", the author states that "Mark Twain" was the call made when the steam boat was in safe water. Twain = two fathoms (12 feet). A good name for an author who wrote so much about life along the river.

As for the name Huckleberry Finn, that part is a little sketchy. Huck Finn was supposedly modeled after Twain's childhood friend, Tom Blankenship. Twain says about Tom in his autobiography, "he was ignorant, unwashed, insufficiently fed; but he had as good a heart as ever any boy had...  I heard (later in life) he was a justice of the peace in a remote village in Montana and was a good citizen and greatly respected." There are lots of huckleberries in Montana...

Twain did hear of the phrase Huckleberry as he was creating the character and found it meant someone insignificant and rustic. He also knew of the huckleberry bush from writers like Thoreau who described it as "a plant that does not submit to cultivation and tastes best when picked wild." Some say Twain just liked the sound of the name "Huck Finn".

During that same time period "I'm your huckleberry" also meant, “I’m just the man you’re looking for” or “I’m the man for the job.” It can also carry a darker meaning as "Hucklebearer" was a term used in the old south for pallbearer. 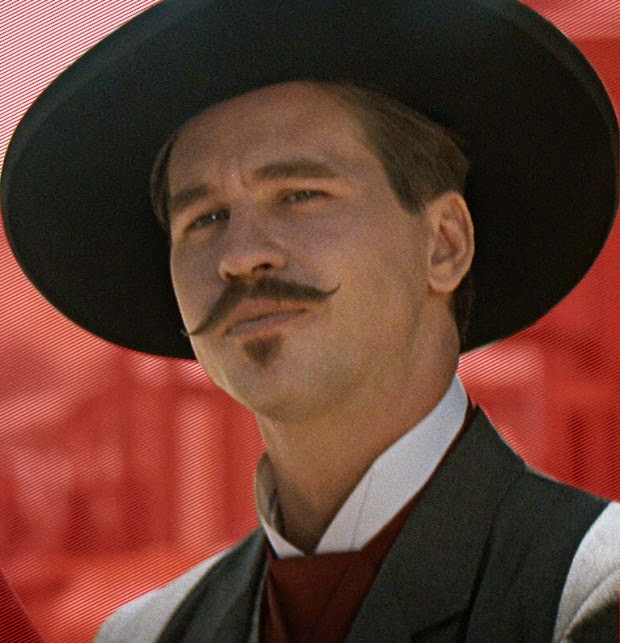 Doc Holliday is quoted as telling Johnny Ringo, a member of the notorious Clanton Gang, "I'm your Huckleberry" or maybe he said "Hucklebearer", he had a strong southern drawl... This quote was made famous in the western film "Tombstone" where Doc Holliday was played by Val Kilmer. Some believe his real meaning was "I'll play any game you want but you'll not like the outcome."


The Tombstone shoot out was Oct. 21, 1881 and Mark Twain published the first of several Tom Sawyer books starting in 1876, so Tom and Huck were well known by then. Because Doc was an avid reader, maybe he knew the character "Huckleberry Finn".

And since I'm a cartoon fan - What gives with the cartoon character "Huckleberry Hound"? I guess his southern drawl and laid back, carefree demeanor could be seen as a tribute to the Twain Character.

Now that I've taken you down this confusing, but hopefully entertaining path, I'll finish with the message I originally intended - 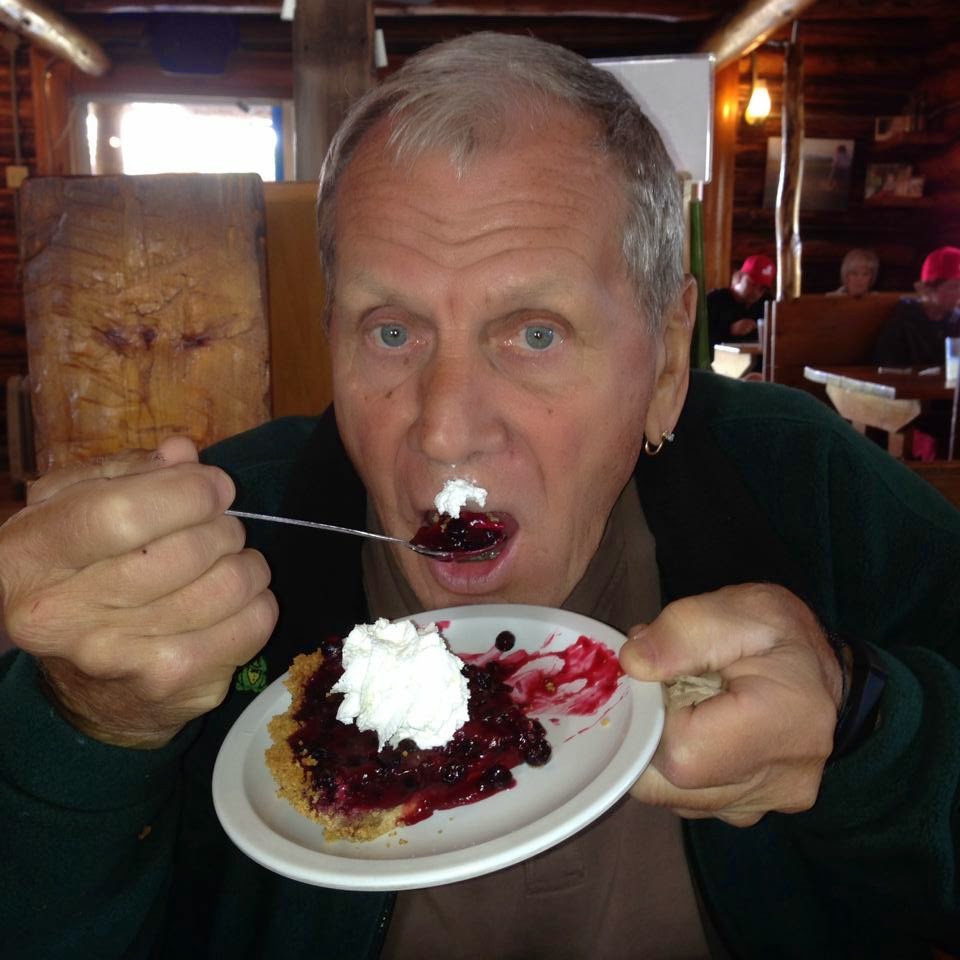 Bonus point if you can name this character...

After checking into the park Saturday morning, we learned that we're at least a month too early to see all of the park. They had a lot of snowfall this past Winter and are not scheduled to even think about opening the "Road to the Sun" until middle or even late July.

We were determined to see some of the park interior so Sunday we packed our gear and headed up to the "Many Glaciers" park entrance for a hike to Grinnell Glacier.

The 5.5 mile hike starts across the from the Grinnell Lodge on Swiftcurrent Lake and follows Swiftcurrent and Josephine lakes before heading up the side of Grinnell Mountain. Elevations range from 4500 to over 6000 feet. 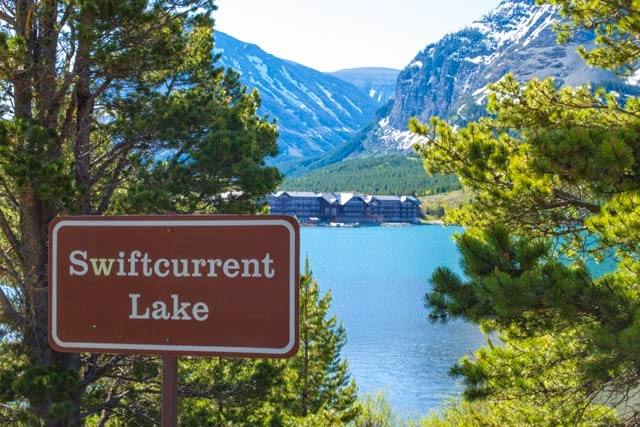 We made it past both lakes easily but as we started to climb Grinnell Mountain, there was a LOT more snow. 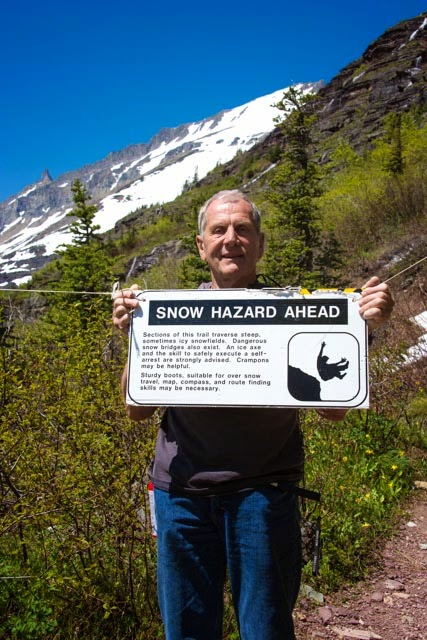 We managed to navigate over and around a number of snow banks, taking care not to slip and slide down the mountain. 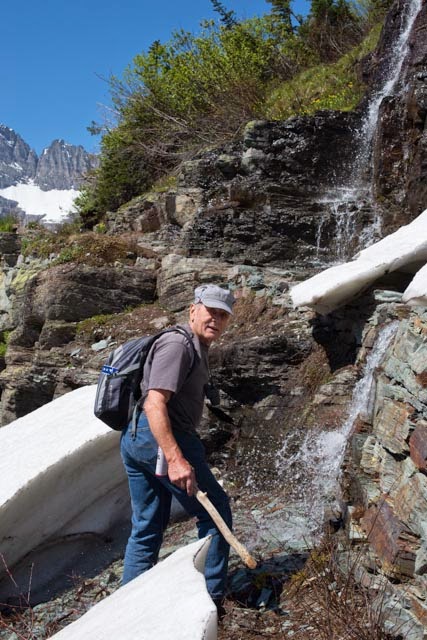 We finally got to a place on the trail that required crampons and an ice pick. It was time to turn around. 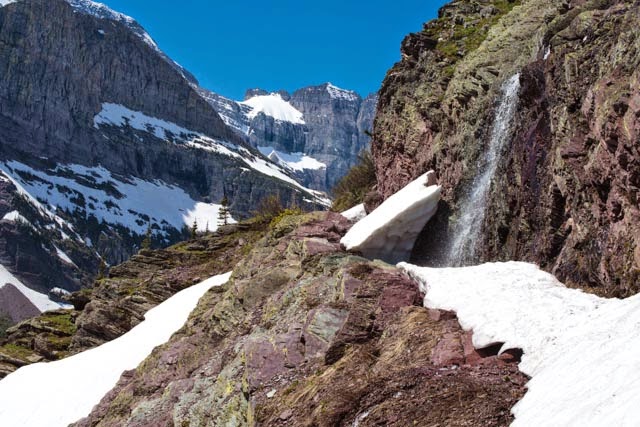 We grabbed a few shots of lower Grinnell lake and the Glacier then headed back to the trail head.

Wildlife along the way was pretty spectacular too!

On the way back to the trail head we passed these guys who were headed up another mountain for some snow sport. Crazy! 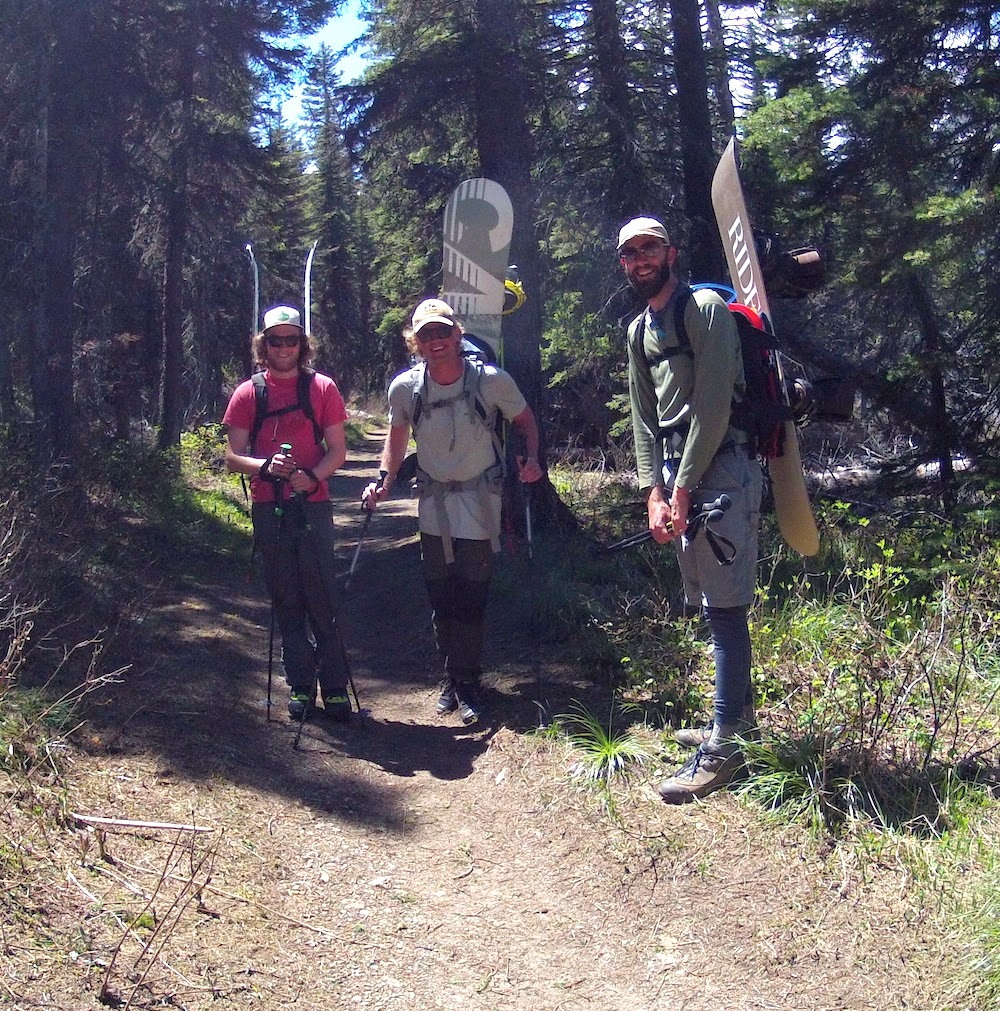 We only made it as far as Grinnell lake (about 8 miles round trip) but it was worth every step!

Posted by ABrushWithHumor at 4:05 PM No comments:

North to Alaska - Week One

We departed Atlanta on Tuesday, May 27th and made a fast, 3 day trip to Jamestown, North Dakota. At Mile 7 of a 1700 mile trip, we made our first wrong turn. We recovered nicely and we were on our way!

We originally planned on a short (250 mile) trip for the first day with a over-night stop in Paducah, Kentucky. Aside from liking the name a lot, there's a really cool song about the town:


We felt pretty good by the time we reached Paducah so decided to keep going. We ended up in Benton, Illinois for the night.


TRIVIA: Benton, Illinois claims to be the first city with a Beatle in it. George Harrison visited his sister there 4 months before the rest of the fab four stepped foot in the USA.


Things were going really well and we were averaging over 400 miles a day. When we reached St Louis, we turned west and continued to Kansas City before heading North.

TRIVIA: The part of Hwy 70 we traveled from St Louis to Kansas City is a section of the FIRST interstate constructed as part of Eisenhower's Interstate system.

We spent two nights in Jamestown, ND, visiting Charles' cousins. It was great to see Erika again and we had a great time. 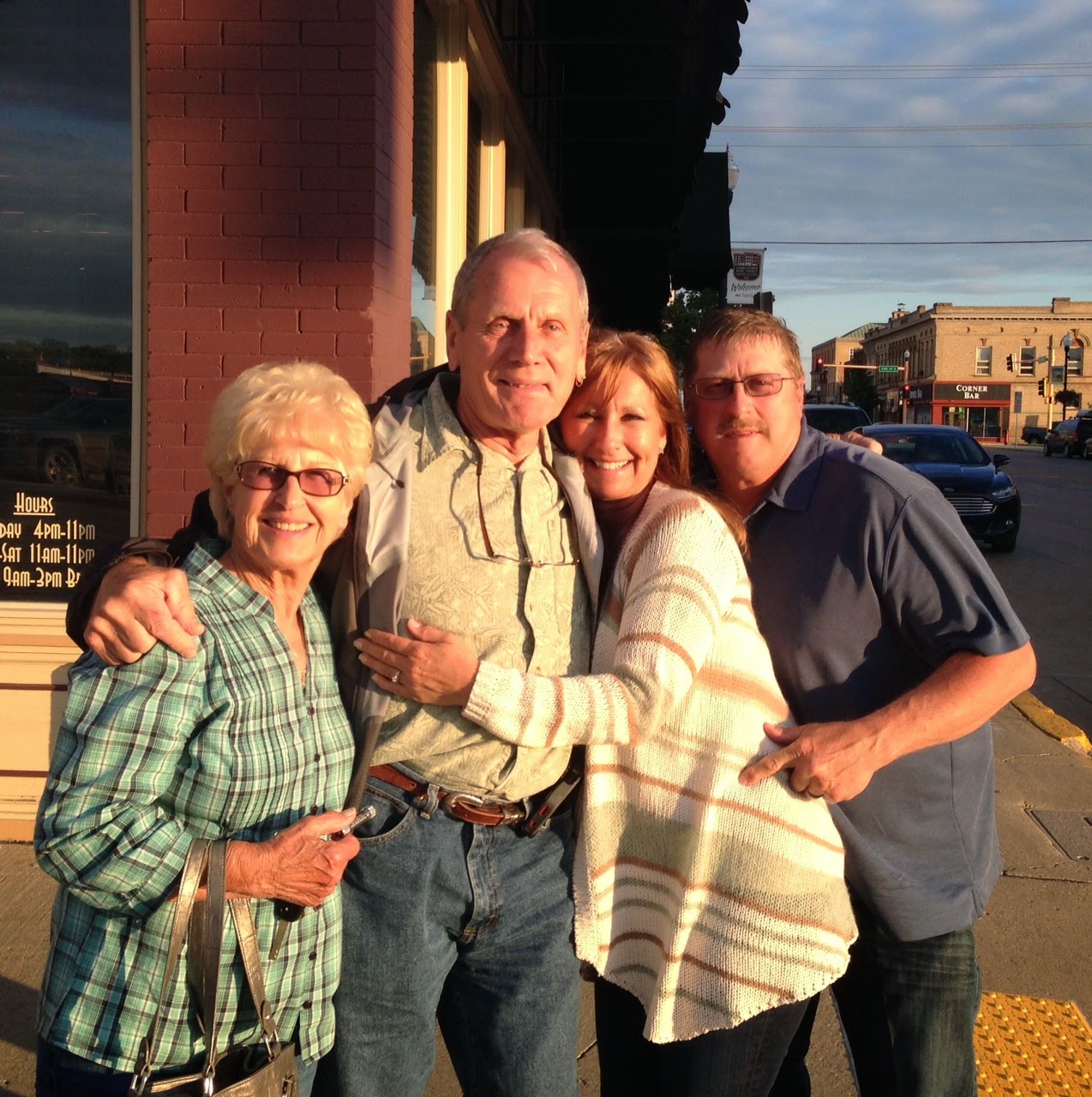 Our next stop on our westward route toward Glacier National Park in Montana was Makoshika State Park. This is a wonderful park full of Dinosaur bones and other fossils from the Cretaceous period (end of the age of the dinosaurs). Lots of great dinosaurs have been found in the park and the landscape is "other-worldly"!

We we're in Makoshika for two nights then continued West. We spent the night in the Walmart parking lot in Havre, Montana (free RV parking for Walmart customers and a great place to stock up on supplies). Friday morning we made the last 200 mile hop to Glacier Park.

Tonight we're sitting in a KOA park just outside Glacier National Park. We're here for the power, water, and free WIFI before heading into the park for a prettier parking space but NO services at all.

We'll be in scenic Glacier park for 5 days, enjoying the great outdoors with no cell service, wifi, or electricity. We'll check in with great stories and amazing photos no later than Friday, June 13th.
Stay tuned! 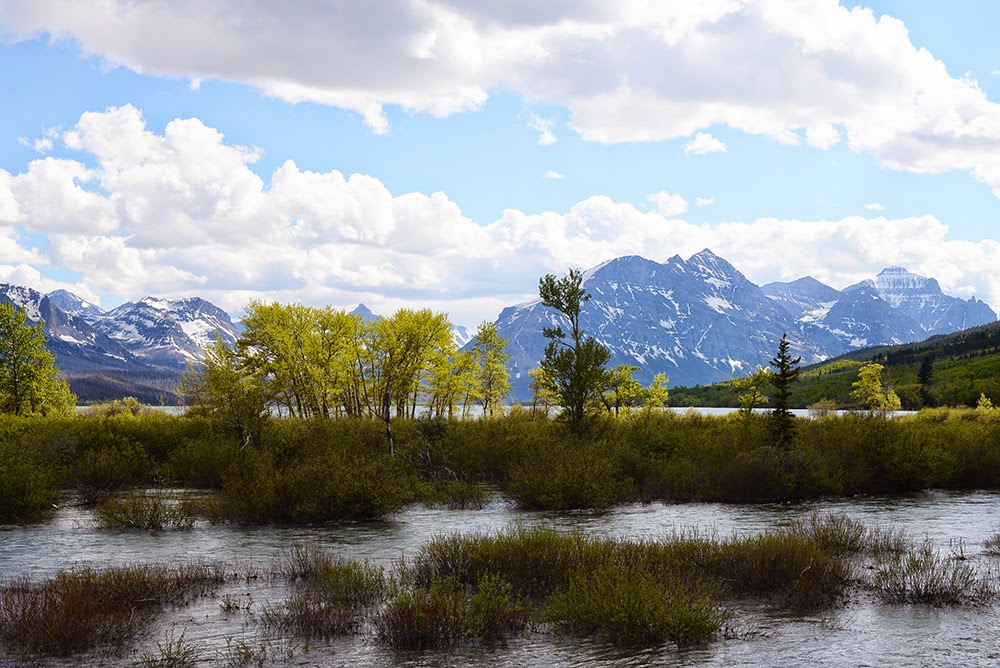 
Posted by ABrushWithHumor at 8:08 PM No comments:

How times have changed...

Some of you followed our sailing adventures on this blog and probably thought we were lost at sea after no new posts for a few years.

Life got busy and our interests changed. We decided we'd seen enough of the world by sea and wanted to see a bit of the USA by land. Our transportation, "RobinLeigh", took on a transformation of sorts: